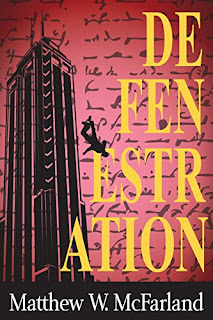 Almost four years ago now I reviewed a collection of short stories by Matthew W McFarland entitled Fifty/Fifty and Other Stories. Among those stories was what is now (more or less) the opening chapter of this novella. It was also called ‘Defenestration’, and I gave it 4.5 stars. The question is, does this novella measure up to its namesake?

The short answer is: almost. There was a simplicity and elegance to the prose of the short story which made it a pleasure to read. For the most part, that quality of writing is maintained here. The events of the short story remained largely unexplained. The reader simply experiences the defenestration [for those unfamiliar with the term, it is the act of being thrown from a window] from the first person point of view of the defenestratee (a word I have probably just invented). The absence of a context or explanation for this event is no shortcoming at all for this short, elegant piece.

This novella provides the background, context and sequel to this event.

The plot emerges slowly from the narrative as characters are introduced and stories told. I was very impressed with the way the different streams of the narrative and the characters they featured were gradually woven together into a very pleasing tapestry. I would urge those who prefer stories with a faster pace and more action to exercise patience here. It is not a long book, and if you put in the effort and spare the time I hope you will appreciate the skill of the weave and the elegance of the prose.

As interesting as the plot is, as much as anything this is a series of character studies of a number of mildly to extremely dysfunctional people living in present-day Belfast. Each of the characters is well drawn, although it did take me a little while to sort among the different female characters. Melanie is as delightfully twisted a character as I have encountered anywhere.

The central male character, Adam, who is ostensibly the narrator of this tale, is lacking in detail until well past the middle of the book. We know nothing about him: his age, family relationships or profession. Large sections of the book are virtually a third person narrative and, although we are aware that Adam is the narrator, he is not really present in the story at those times. I remained somewhat confused about his age. At one point, reference is made to his ‘old age’, yet he elsewhere appears as a potentially suitable match for one of the young women in the story.

The author uses a clever device to enable the narrator to relate events at which he is not (ostensibly) present—I don’t want to give away the plot by being more specific. However, this device breaks down in at least one scene towards the end of the story where it can no longer operate. It involves a prison visit of which the narrator cannot be a witness.

The only other misgiving I have about this novella is that the author has a tendency at times to slip into a somewhat didactic and self-conscious philosophical/social commentary. This was a little too direct and obvious for my taste.

A sharper eye for editing would have picked up a few obvious errors here and there.


McFarland is an excellent writer, with a facility both for writing elegant prose and weaving together a good story. I hope to hear more from him in the future.

Posted by Philip Newey at 10:55 PM No comments: