My Take on Doctor Who

I have been a Doctor Who fan since its inception in 1963. Even more so of its modern incarnation, beginning with Christopher Eccleston. Of course there have been ups and downs: classical, memorable story lines and utter clangers. So what do I make of the new series, featuring Jodie Whittaker as Doctor Who?

Pretty much everything, I think.

The story lines have been generally weak. Even in the better stories (e.g. the Rosa Parks story) they have been rather un-Doctor Who-ish. They have not been linked together by any overall story arc. Yeah, sure, the baddy from episode one turns up again in the final episode, but that was in no way organic. It could have been any baddy and made little or no difference. Where were the intriguing clues and hints at mystery (as in 'Bad Wolf', or the re-appearances of versions of 'Clara')?

And who are these people? Why are they travelling together? Are they just on a road trip together? What of their off-Tardis lives? The companions don't seem to have any real relationship with the Doctor. She's just the bus driver and tour guide. Why these people? Mostly they stand around looking silly, waiting for their next instruction from the Doctor (or their next line).

I think it was a mistake to immediately burden the Doctor with three companions. It meant that Jodie had less time and script to develop her character. The result is that none of them really have a chance to develop their characters, because there is no focus on one or two characters and their relationships to each other. And the companions are not, really, very interesting. At the end of the season, I still scarcely know their names.

And has the new team decided to cut all ties with the entire history of Doctor Who? Will there be no recurrence of past characters/villains? No working out of consequences from earlier story lines? If that's the case, in what sense is this really Doctor Who at all?

And what of the Doctor? Well, the writers seems to have gone out of their way to make Jodie as gender neutral as possible, perhaps to avoid offending anyone. I would have liked to see a female Doctor with, well -- at the risk of being pilloried -- more femininity. Picture, in the first episode, the Doctor in a skirt and stilletoes, climbing a huge gantry. I think moments of great humour and surprise have been squandered by playing down the Doctor's femininity.

This has been the first series of Doctor Who when I actually turned off an episode half way through because I thought it was unwatchable (the 'witches' episode). It seems there will another series -- or, really, the second half of this series. But can the franchise survive beyond that? Without a serious shake-up, I doubt it.
Posted by Philip Newey at 4:49 PM 1 comment:

A question to Amazon

As well as an editor, I am an independent author in Australia, and I have been using Amazon KDP (and previously Createspace) to publish my paperback books for some years. I have also assisted other Australian authors to do so. Since 1 July 2018, changes to Australian law regarding GST have led Amazon to make the decision to no longer ship proof copies and author copies to Australia. Instead, I, as an author, am directed to buy print copies from the http://amazon.com.au retail page. This means paying (for instance) AU$18.33 plus shipping for a copy of my own book, rather than US$3.68 plus shipping as it would have been. This is a HUGE cost increase and makes purchasing copies for resale locally no longer viable.

I would love to hear from other authors, particularly in Australia, but elsewhere too if a similar situation pertains.

Amazon is a large, technologically advanced company, and my question to them is: When will Amazon resume shipments of proofs and author copies to Australia, including handling of the required GST payment?

'Loving our leaders' is not a condition with which we are much afflicted in Australia. For the most part, they are regarded somewhere below used-car salespersons and paedophiles.

We might aspire to admiring our leaders, or respecting our leaders - should they earn such admiration and respect. But 'loving' them? I don't think so.

No matter how worthy of respect and admiration a leader might be, loving them seems an inappropriate response. Somewhat sycophantic. Somewhat blind. We are told, after all, that love is blind. Love or devotion to a leader strikes me as a kind of secular idolatry. Sometimes not so secular. The kind of language that some people use with respect to their political leader(s) borders disturbingly on religious fervour, which is not something I admire even when directed towards a divine being, let alone an earthly one.

However inspiring our leaders might be (we wish!) 'loving' them strikes me as a kind of pathology. Sure, love them, if, you know, you love everyone - yada yada yada. Love them in the abstract, if you wish, as you might love humanity - yada yada yada. But singling them out for some special kind of devotion? Spare me!
Posted by Philip Newey at 6:39 PM 1 comment:

The Perils of Pluto

I am a regular quizzer. I love answering questions. I know it's sad, but I get a kick out of knowing something really obscure that few others know. I'll take my thrills where I can get them.

This is a note to quizzers about that pesky solar system object known as ‘Pluto’. Planets come up quite often in quizzes, and there is frequently a discussion about Pluto—planet? dwarf planet? orbiting canine? In 2006 Pluto was demoted to the status of dwarf planet. However, many of us have the notion—but originating where?—that Pluto has been recently reinstated to full planetary status … perhaps on the basis of good behaviour? Actually, the idea that Pluto was reinstated arose because of an APRIL FOOLS day story that came out in 2017, claiming that Pluto had been re-planeted. In fact, it’s still regarded as a dwarf planet—or perhaps we should say ‘planet of small stature’? For those concerned about how this demotion has affected Pluto’s psychological wellbeing, you will be pleased to know that there is a group of astronomers trying to change the definition of planet so that it basically means: sub-stellar object of roughly spherical shape. If this definition is accepted, Pluto will once again join the ranks of the planets. Unfortunately, so would 102 other bodies in the solar system. Good luck remembering all their names, quizzers!
Posted by Philip Newey at 8:26 PM 1 comment:

My new novel, The Woman by the Urn, will be released on 21 June 2018. You can pre-order the Kindle version here. 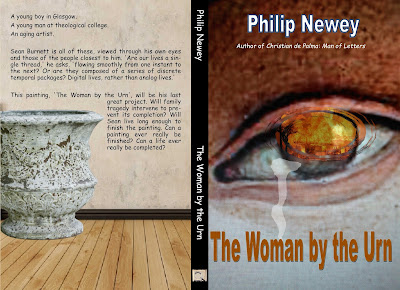 A young boy in Glasgow.
A young man at theological college.
An aging painter.

Sean Burnett is all of these, viewed through his own eyes and those of the people closest to him. 'Are our lives a single thread,' he asks, 'flowing smoothly from one instant to the next? Or are they composed of a series of discrete temporal packages? Digital lives, rather than analog lives.'

This painting, 'The Woman by the Urn', will be his last great project. Will family tragedy intervene to prevent its completion? Will Sean live long enough to finish the painting. Can a painting ever really be finished? Can a life ever really be completed?

Posted by Philip Newey at 7:39 PM No comments: